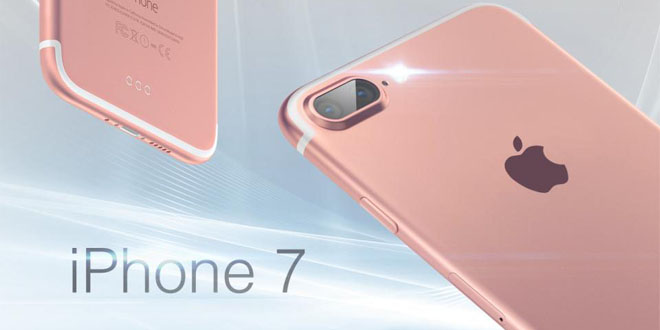 Tim Cook took to the stage at the Bill Graham Civic in San Francisco and told us: “We have created the world’s most advanced smartphone – the best iPhone we have ever created. This is iPhone 7.”

Obviously Apple would say that, but we’ll let you make up your own mind as you read through all the new features below – oh and the headphone jack? Yeah, that’s gone.

Cut to the chase

The iPhone 7 release date is set for Friday September 16 in 28 countries including the US and UK, with iPhone 7 pre-orders already open.

Demand looks to be high though, with Jet Black orders now quoting November for shipping. If you haven’t already pre-ordered online it looks unlikely you’ll get any variant of the new iPhone 7 on release day, unless you queue up.

A week after September 16, the iPhone 7 will also be available in a further 30 countries too.

It inherits the same pricing structure as the iPhone 6S when it launched back in September 2015 – at least in the US and Australia it does. For those in the UK the aftershocks of Brexit are being felt with a £60 price hike for the iPhone 7. 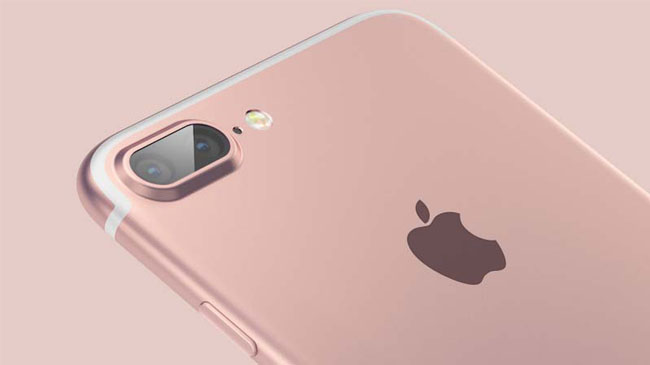 One of the big new talking points is its water and dust resistance, with IP67 protection bringing the new iPhone into line with the Samsung Galaxy S7 – and giving you peace of mind when you’re in the bath or out in the rain.

Anyone hoping for a flush rear to the new iPhone will be disappointed though, as the iPhone 7 has a very noticeable camera bump.

That camera bump is a little bit special though. It’s molded from the aluminum frame of the phone and houses the antennas – removing the ugly bands of its predecessors on the black versions. On the other colors though, the bands are still noticeable at the top and bottom of the device.

There are two new colors as well, with the glass and aluminum Jet Black joined by the matte-finish Black option – the latter option also features a black Apple logo on its rear. You’ll also get the choice of silver, gold and rose gold, but there’s bad news for Space Gray fans: that option is dead.

Something else Apple has built into the design of the iPhone 7 is stereo speakers, with one at the top and one at the base of the handset. That gives you louder, clearer audio, which will be great for movies and gaming.

Apple says the iPhone 7 kicks out twice the volume of the 6S, as well as having an increased dynamic range. In short, they should sound good.

It’s gone! It really has gone. Apple has removed the standard headphone jack – but it’s not all bad news.

You get a set of Lightning EarPods in the box, meaning you’ll be able to plug in right away, while an adaptor is also included, so you can continue to use your current headphones if you wish – although it’s certainly not the most elegant implementation.

If you’re feeling flush you can splash the cash ($159, £159, AU$229 to be exact) and get yourself a set of AirPods – Apple’s first wireless Bluetooth earbuds. They offer five hours of listening on a single charge, dual microphones enabling you to take calls and interact with Siri, and touch response, so you can answer calls and launch Siri. 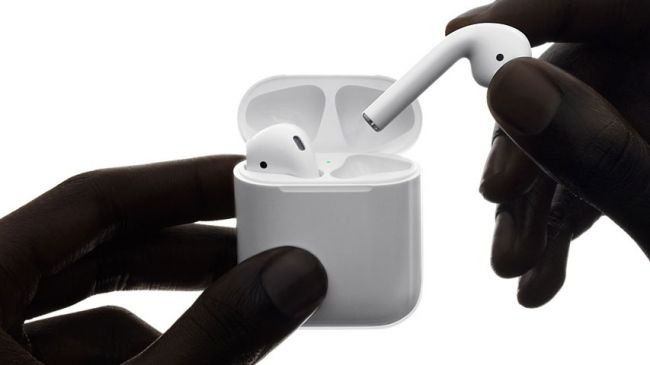 The AirPods also come with their own case, which houses its own battery providing up to 24 hours of playback, as it will charge the buds when they’re sitting in it.

Pairing the AirPods with the iPhone 7 is easy: all you have to do is move the case near the phone and tap the on-screen prompt. 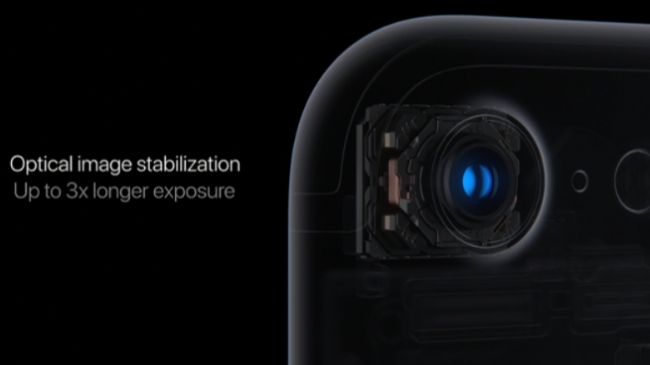 Apple has overhauled its camera tech for the iPhone 7, bringing in a brand new 12MP sensor on the rear and upping the front-facing snapper from 5MP to a 7MP Facetime HD offering.

The larger iPhone 7 Plus comes with a dual-camera setup, but this is the iPhone 7 page, so we’re focusing on that phone here.

The iPhone 7 has a completely new camera system, and gains OIS (Optical Image Stabilization), something the iPhone 6S missed out on but which the 6S Plus boasted. 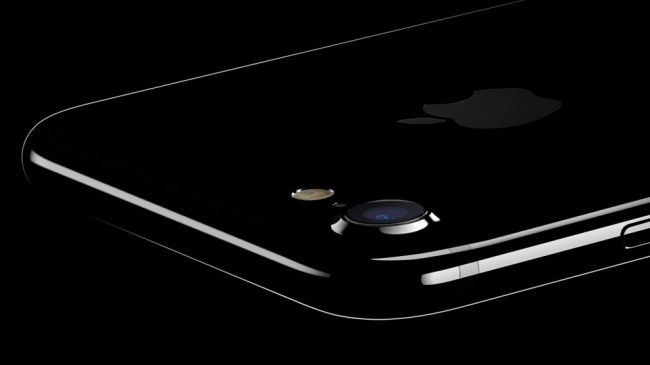 The wide-aperture lens on the back lets in 50% more light, and it’s 60% faster and 30% more energy efficient.

There’s a six-element lens and the two-tone flash now has four LEDs for 50% more light and a 50% further reach. It also features a flicker sensor for artificial light, for better picture results.

Apple has also increased the camera’s smarts behind the scenes, with the snapper adapting even better to the environment to automatically adjust settings for the best possible result.

Apple says the iPhone 7 and iPhone 7 Plus have the best battery life of any iPhone – and so they should. It reckons those upgrading from the iPhone 6S can expect, on average, an additional two hours from each charge.

Apple has stuck with the same screen size and resolution from the 6S for the iPhone 7 – so at first glance there’s not much to report.

The 4.7-inch display sports a 1334×750 resolution, which in turns gives you a 326ppi pixel density. That served the 6S well, so you shouldn’t worry about it on the iPhone 7. We understand if you’re drawn to the pixel packed Galaxy S7 and S7 Edge though.

However, crank up the brightness bar on the new iPhone and you’re eyes will be in for a treat. Apple has upped the brightness of the display on the iPhone 7, for an even brighter, bolder visual experience. 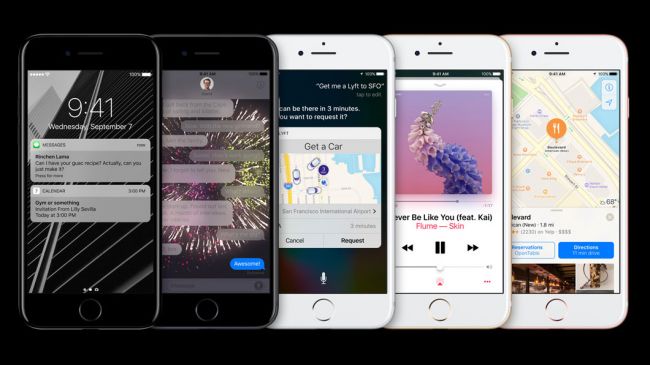 The iPhone 7 has been groomed to launch alongside iOS 10, and it’s a tremendous feature upgrade over iOS 9.3. It introduces a much smarter Siri that can command third-party apps, new Messaging functionality and a convenient Raise to Wake way of lighting up the phone.

It doesn’t stop with a software upgrade under the hood. iPhone 7 also gets a performance boost, with the phone packing a four-core, 64-bit Apple A10 Fusion chip.

That’s a big leap from just a dual-core processor in the iPhone 6S, with Apple saying the iPhone 7 is 40% faster than its predecessor, and twice as fast as the iPhone 6.

While Apple hasn’t confirmed the amount of RAM inside the iPhone 7, reports suggest we’re looking at 2GB, which means it looks like it’ll be less powerful than the iPhone 7 Plus with 3GB of RAM supposedly inside.

It may not look like it, but Apple has redesigned its home button, making it more powerful than ever. It features the same pressure sensitive technology as the touchpad on the new MacBooks, as well as delivering taptic feedback.

I see your site is in the same niche like my blog.
Do you allow guest posts? I can write unique articles for you.
Let me know if you are interested.

Yes Sure email your article at contact@technologythrill.com